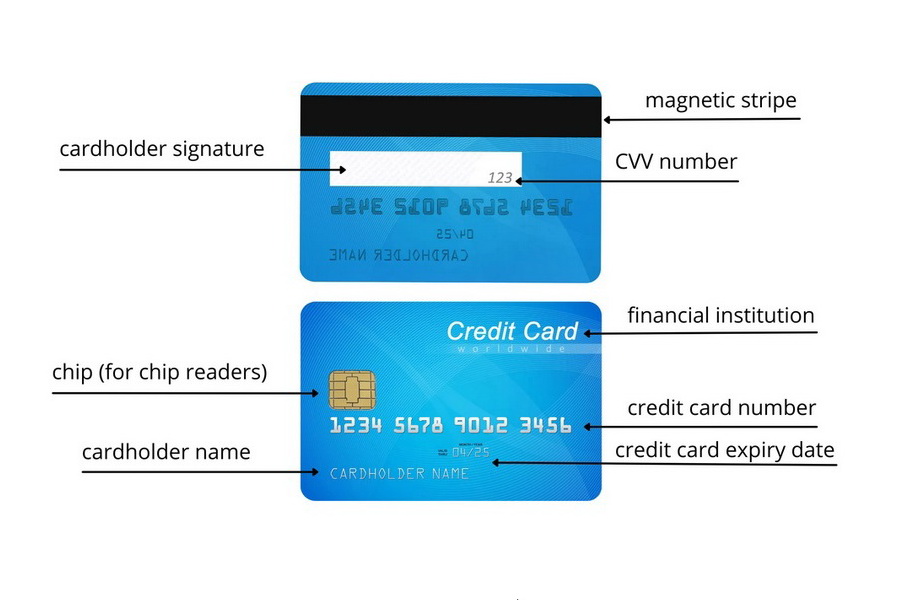 What are the parts of a credit card?

The use of credit cards has increased considerably in recent decades.

They are used in practically any establishment and especially to make purchases online or over the phone. They facilitate commerce, create payment options and, above all, reduce the risk of physical money theft, although they increase identity theft.

To make good use of the cards and the money involved, it is necessary to know the parts of a credit card, especially to avoid the risk of theft. Below we explain the elements that make up a credit card and the reason for each one.

Cards are made of plastic material and their dimensions and characteristics are uniform worldwide. The average size is 85.60mm x 53.98mm and the user’s name always appears on the front of the card.

The chip is a faithful system in the safeguarding of information that prevents identity theft, since it transfers the data instead of storing it.

The card number format is not a random number and is defined by the International Standards Organization (ISO) standard that ensures that each credit card number follows a predictable format.

The first digit of each credit card number is called the primary industry identifier.

Cards beginning with 4 and 5, such as Visa and Mastercard, are generally issued by the banking or financial industries, while those beginning with 6 are bank or merchant cards.

Cards starting with a 3 are related to tourism and entertainment, such as American Express and Diner’s Club. Finally, fuel cards without a Visa or Mastercard logo may start with a 7.

The card number consists of 16 digits and is unique in the world. They are separated into groups of 4 in order to better identify them, i.e. it is not because each group of 4 digits means one thing, it is merely practical. Example:

The meaning of these 16 numbers is as follows:

The first four digits (1234) are the identification number of the entity providing the card, and it is different depending on the entity to which it corresponds.

The next digit, (5) indicates the type of card and the financial institution to which it corresponds (American Express, VISA, etc.).

The next ten digits (6781234567) are the identification number of the user to whom the card belongs, which uniquely identifies him/her.

The final digit (8) is a check digit. It is a security digit that uses the Luhn algorithm. It works on the basis of the sum of all the numbers on the front of the card while doubling half of them and then adding an additional digit so that the final sum is an even number multiple of 10. This security digit makes it difficult to create a random card number, since only one in 10 numbers will effectively be a valid number.

On the back is also the expiration date of the card indicating first the month and then the year of expiration.

On the back (or sometimes front) of the card is a 3 or sometimes 4 digit number that serves to validate the card. Although they may not seem like important numbers, it is necessary to protect them as they are the data required to make purchases over the Internet.

It is a security feature mainly for Internet purchases as it prevents identity theft by verifying that the customer placing the order has the card and that the card account is legitimate. It is not embossed so as not to be scanned by card readers.

Additionally credit cards have information such as the name of the bank, the category and the franchise. This last one will allow you to know in which establishments it can be received since cards such as American Express and Diner’s Club are not accepted in all establishments that receive credit cards.

Remember that a bad administration could affect your credit history. And most importantly, take care of your card from cloning, this way you will avoid identity theft and online fraud. Do not lose sight of it, keep a record of the transactions you make and review your account statement to detect any anomaly.

What is a credit card credit balance?

How many credit cards should I have?